Skip to main content
Restrictions at Lisbon airport due to construction work. Read more.
Covid-19: Your safety and well-being are our priority. Check here the restrictions in the destinations.

Lagoa do Fogo – Great place for a pedestrian trail. With vegetation that only exists in its volcanic extent, this lake has a wilder side comparing to others, making the descent to its base a mandatory stop.

Lagoa das Furnas – Located in Furnas Valley, this lake is in an easy access place, which means that anyone can go for a visit. Lake with great extent and lush surrounding vegetation. It's in its margins that the famous Furnas meat stew can be baked.

Parque Terra Nostra – A magnificent botanical garden with a wide variety of endemic species and many others. With one of the most impressive collections of camellias in the world, Parque Terra Nostra is without a doubt a unique place, especially to nature lovers.

Caldeira Velha – Situated in Ribeira Grande, on the way to Lagoa do Fogo, Caldeira Velha is an excellent option for those who want to have a relaxing bath in the typical thermal waters of the Azores.

Portas da Cidade – Built in the eighteenth century, they are considered the ex-libris of the city of Ponta Delgada. This monument consists of a set of three round arches, built in regional stone, presenting a contrast between white and black basalt, a typical characteristic of the island of São Miguel.

Igreja de São Sebastião – Best known for Matriz, this church was built between the years 1533-1545 as a promise of the inhabitants of São Miguel Island to São Sebastião to end an epidemic. After several renovations, the Gothic styled church presents today Manueline and Baroque elements, being built with limestone and basalt from the island.

Igreja do Colégio – Former residence of the Companhia de Jesus, the Igreja do Colégio now houses the Museu Carlos Machado’s Núcleo de Arte Sacra. Containing paintings and sculptures of the seventeenth and eighteenth centuries in its assets, it presents itself today as a cultural space, with a large shed for education and knowledge.

Cozido das Furnas – Probably the most famous dish of São Miguel Island. The Furnas meat stew consists of a mixture of meat and vegetables cooked in a pot, which is put into a bag and buried in the geothermal soil surrounding Furnas Lake. With a cooking of around 6 hours, it has a unique flavor that is not achievable in any other part of the world.

Pineapple – Due to the favorable weather it is usual to see the cultivation of certain tropical fruits in São Miguel Island. Pineapple is the most successful example. The pineapple cultivation was introduced in São Miguel around 1840-1850. A high quality product that quickly gained countless admirers, even becoming a symbol of the island and the region.

Tea – In São Miguel Island there are the only two tea factories in Europe. In Gorreana and Porto Formoso factories, the visitor will have the opportunity to tour the plantations, visit the factories where the tea is produced and in the end, to taste one of the greatest assets of the Azores. 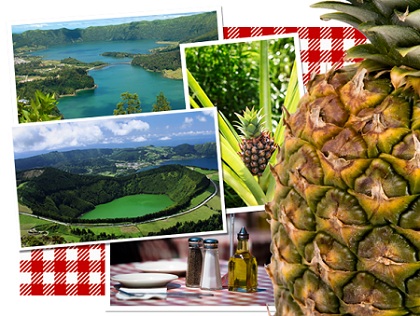